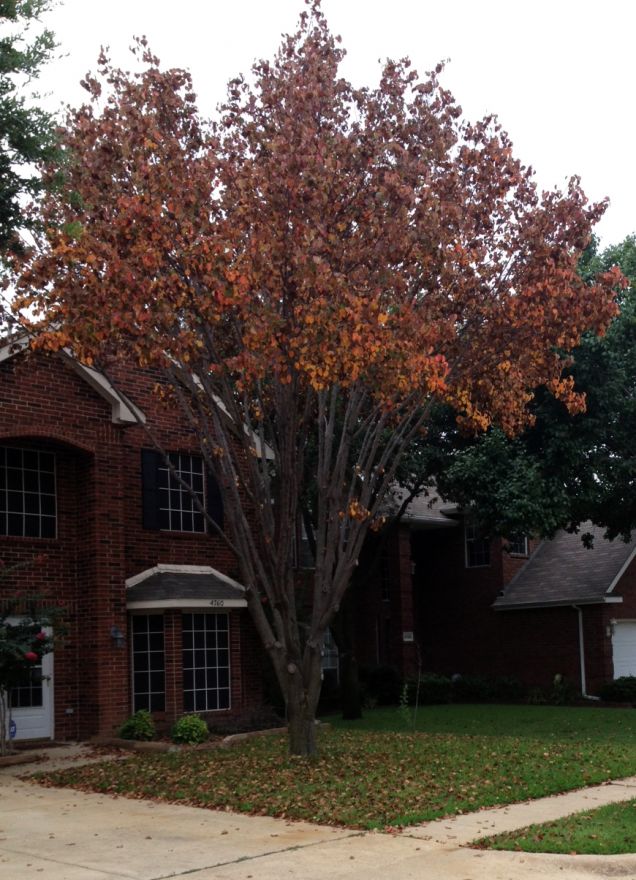 Cotton root rot is a soil borne diesease caused by the fungus Phymatotrichum omnivorum. It is also commonly referred to as Phymatotrichum root rot, Qzonium rot rot or Texas root rot. Attacking more than 2,000 species of plants, cotton root rot is an incredbly destructive disease. The fungal spores can persist in the soil for as long as 20 years before they become active and infect a plant. It is a bigger problem in clay soils with a high pH, 7.0-8.5, which is typical of soils in North Texas. The disease is also triggered by hot summer temperatures and you’ll typically see plants succumb to the disease from June through September, when soil temperatures are in the 80s F. The disease is a particularly bad problem in crops like cotton and alfalfa, but also attacks many species of trees and ornamental plants.  Bradford pears, such as the one in the photo, are commonly infected by the disease. Because many areas of North Texas were once planted in cotton, there is a high level of the fungus present in our soils.

The first symptoms you’ll notice are a yellowing and browning of the leaves, which will then wilt. Soon after the leaves wilt the plant typically dies very quickly with the leaves still attached to the plant. By the time the leaves have wilted, the entire root system is typically infected and saving the plant can be difficult. You may then notice white sporemats on the soil surface or trunk of the plant, especially if conditions have been moist. These sporemats look like cotton. Larger trees will die more slowly, so as soon as you notice a yellowing in the foliage, you should immediately call a certified arborist to diagnose the problem.