Want to see something both creepy and cool?! Check out this Tobacco Horn Worm (Manduca sexta) we found on shrubs in one of our customer's yards. 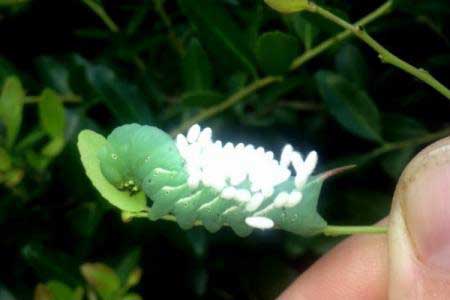 We call it a “walking dead” because it's been infested with the eggs of a Braconid Wasp. These are small parasitic wasps that usually kill their hosts, though some cause the hosts to become sterile and less active. The eggs are attached to the bodies of different caterpillar species and then larvae hatch and proceed to consume the host.

While this may seem pretty creepy, it's nature's way of providing us with some natural biological control for chewing caterpillars that can be highly destructive to certain plants and agricultural crops. Beneficial wasp eggs can be released in your landscape to control caterpillars such as these Tobacco Horn Worms, Tent Caterpillars, Webworms and more. If you're worried about having this wasps in your garden, there's no need to fret: The vast majority these beneficial wasps are not capable of stinging humans. In fact, they are so small you'll probably never notice they're there at all.